Vitamin C+Zn Super Health spray is a powerful mix of Zinc and othere well-known antioxidants. Taking this solution daily will support your immune system’s response to viruses. It helps prevent many health problems during the winter season, including cold and cold sore outbreaks. The ingredients includes main antioxidants – Zinc and Vitamins E – plus Vitamin D3 (a modulator of immune responses) and L-Lysine (an essential amino acid suppressing cold sores development).
BUY THIS SPRAY

Why C+Zn spray is Highly Effective?

Each of key ingredients in Vitamin C+Zn Super Health spray’s formula is a very capable micro-nutrient vital for your immune system to fight viruses and harmful gems. All together they help keep your healthy around the year. A combination of Vitamin E, Vitamin D3 and L-Lysine work in synergy that enhances the effect of Vitamin C+Zn spray’s formula. Having this spray in your pocket or handbag can be quite handy and wise. It also helps you keep your heart and arteries in good shape.
In your search for simple steps to better health you should look first at prevention of disease. The best strategy of prevention is to boost your immune system. Vitamin C+Zn Super Health spray offers a very simple yet effective way to do it. The spray is easy to use and very convenient to carry when you have to go on your journey. As the potent blend of antioxidants, Vitamin C+Zn spray also helps repairing damage to blood vessels and cell caused by toxins. On top, it will help reducing a LDL cholesterol formation and improves production of collagen in your skin. The inclusion of Vitamin D3 is very beneficial too. As some mediacl studies show, insufficient levels of Vitamin D3 in the body make Zinc less effective. 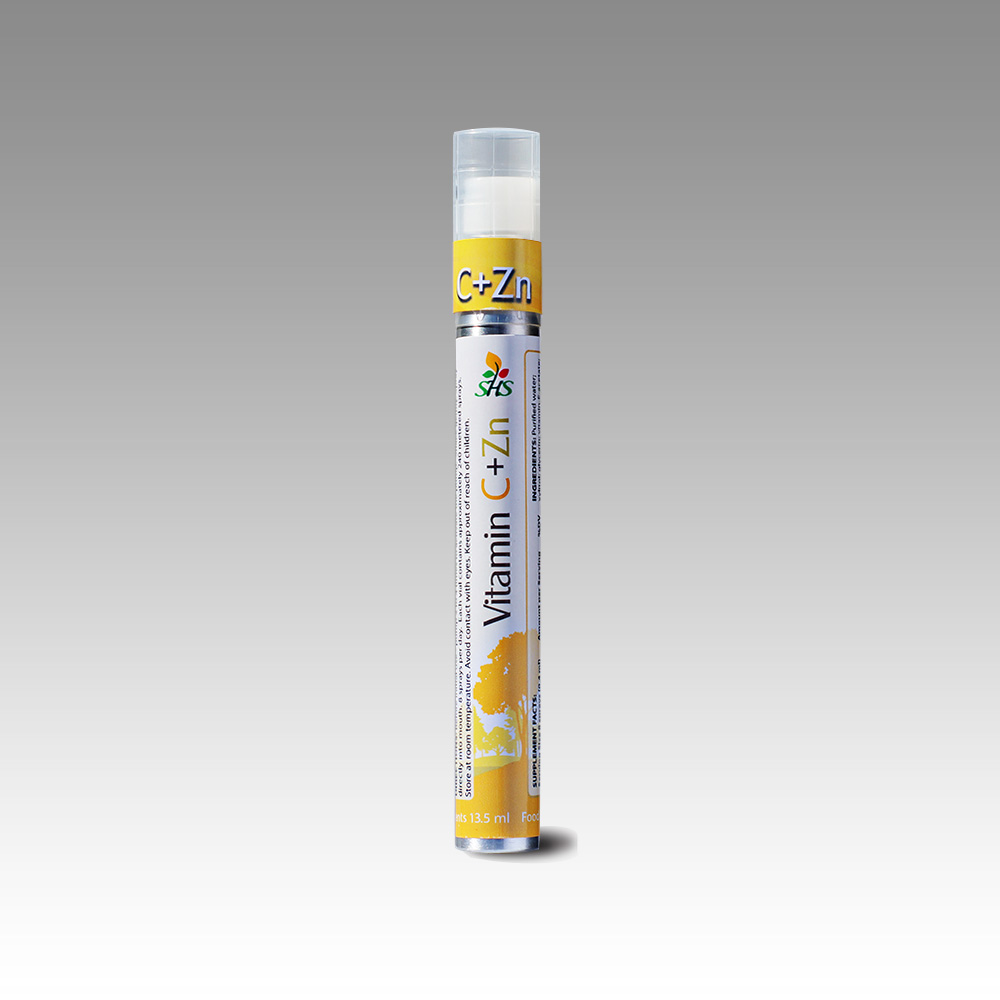 Vitamin C
Zinc
Vitamin D
Vitamin E
Lysine
Vitamin C
The crucial role of vitamin C in early brain development and chronic disease prevention was observed in two recent studies in Canada and Denmark which highlighted the surprising extent of vitamin C deficiency and brought up more evidence about the importance of vitamin C for the health. The Danish researchers at the University of Copenhagen have found that deficiency of this vitamin in early postnatal life of guinea pigs causes in impaired neuronal development and a functional decrease in spatial memory. The researchers stressed that Vitamin C has been shown to have a key function in the brain. During deficiency brain is able to retain higher concentrations of vitamin C than other organs but may still be more sensitive to deficiency despite these preventive measures”.
Zinc
Zinc is found in every tissue in the body and is directly involved in cell division. Your body also uses zinc to make proteins. It is a powerful antioxidant which can help prevent cancer development and also regulate endocrine function. In St. George’s Medical Hospital, University of London, researchers found that increasing concentration of Zinc serum in the body strengthens cells’ membrane and protect tissues against damage by viruses, venoms and cytotoxins. This mineral is essential for metabolising and functioning of other nutrients. For example, Omega 3 and Omega 6 are converted with the help of zinc into their beneficial forms.
Vitamin D
Vitamin D is a steroid vitamin, a group of fat-soluble prohormones, which is responsible for intestinal absorption of calcium and phosphate. In humans, the most important related compounds of vitamin D are vitamin D2 (obtained through limited dietary sources) and vitamin D3 (developed from the photochemical action of solar UV light in the skin). The latter is used in our spray. In addition to balancing calcium in the body, that prevents osteoporosis or arthritis, vitamin D regulates blood pressure and improves cardiovascular strength, reduces respiratory infections, aids in insulin secretion, relieves pains by reducing muscle spasms, improves skin health and reduces wrinkles. Epidemiological studies have linked vitamin D deficiency to increased rates of cancer, as well as autoimmune and infectious diseases. For example, a review of 31 studies found that pregnant women with vitamin D levels of less than 30 ng/ml had an increased risk of developing gestational diabetes. Read more on vitamin D benefits.
Vitamin E
Vitamin E is a fat soluble compound with strong antioxidant properties. Vitamin E is incorporated into cell membranes and protects them from oxidative damage. Acting as a free radical scavenger, Vitamin E reacts with pro-oxidants to form a tocopheryl radical which vitamin C further convert to its reduced state. In addition to its activities as an antioxidant, vitamin E is involved in immune function, regulation of gene expression and other metabolic processes. Some evidence points to the use of vitamin E to speed cellular regeneration on the skin and can help the healing process for scars and acne. Vitamin E can be beneficial to people with diabetes because it enhances the action of insulin and improves blood glucose metabolism by reducing oxidative stress. In addition, vitamin-E protects artery walls and helps make cells lining the interior surface of blood vessels able to resist adhering of the low-density lipoprotein (LDL) to this surface.
Lysine
L-Lysine is classified as an essential amino acid meaning the human body cannot synthesize Lysine on its own and thus must rely on adequate dietary intake to function properly. In the body Lysine increases the intestinal absorption of calcium and eliminates its renal excretion, suggesting a potential role in the management of osteoporosis. It is also the precursor of the >amino acid carnitine, which aids in transporting fatty acids into the mitochondria for energy production. Lysine has been investigated for its effects on increasing muscle mass, lowering glucose and improving anxiety. Lysine appears to have an antagonistic relationship with the amino acid arginine which Herpes simplex virus (HSV) infections require for their replication. As a result, Lysine has been studied and used for the prevention and treatment of herpes infections and cold sores. Dr. Linus Pauling reported on several cases of angina pectoris relieved by lysine. Although the actual mechanism is unclear, Pauling hypothesized supplemental lysine may bind with and remove lipoprotein(a) from plaque deposits, thereby reducing thickening of the artery and increasing blood flow.

What We Need Zinc For?

Zinc is a trace element and mineral needed for many normal body functions such as immune function, wound healing, taste and smell function and DNA synthesis. Zinc is an important mineral required for a number of bodily functions involving energy and metabolism (it stimulates activation of 100 different enzymes).
One of its most important roles is in supporting our immune system, which protects us from pathogens, infections, and disease. Zinc is crucial for normal development and function of immunity natural killer cells. Zinc also functions as an antioxidant and can stabilize cell membranes. Research suggests that zinc helps control inflammation by gently tapping the brakes on the immune response effectively ensuring that the immune response does not spiral out of control.

Zinc also plays a role in carbohydrate breakdown (which supplies energy), as well as growth, division, and reproduction of our cells. Conservative estimates suggest that 25% of the world’s population is at risk of zinc deficiency. The common culprit is alcohol which prevents zinc absorption and increases zinc excretion.The American Journal of Clinical Nutrition show that “zinc-deficient persons experience increased.