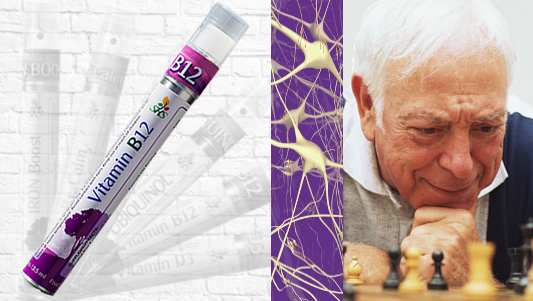 Super Health Vitamin B12 spray’s formula  includes  the most bioavailable form of B12, called Methylcobalamin  that does not require any fruther conversion in the liver. In contrast, the synthesised form  of B12 – Cyanocobalamin – cannot be absorbed without conversion. So, using our spray, you will get Vitamin B12 in the most readily form used by the body.
This spray is superior to tables and provides a less painful alternative to intravenous injections of this vitamin. It offers great support for those whose diet excludes meat,  because the main source of B12 is meet, vegans and vegetarians need B12 supplements (they often suffer Vitamin B12 deficiency).

What is Vitamin B12 and why we need it?

Vitamin B12 is one of the most intriguing vitamin and also one of the most complex. Its role in the operations of our bodies is diverse: maintaining the nervous system and production of red blood cells to the proper functioning of our vital organs (brains, hearts, livers and kidneys).Vitamin B12 also helps conversion of fats and carbohydrates to energy.This vitamin was the last true vitamin discovered in 1948 and has a complex molecule with the mineral cobalt in the centre of its structure.
Vitamin B12 occurs naturally in meats and other sources of animal proteins (it is not found in plants), and serious deficiencies are rare in healthy individuals who consume a balanced diet. However, vegans, vegetarians, the elderly or those who have had any kind of gastric surgery, may suffer lower than healthy levels of this nutrient. A third of people at the age over 50 produce too little stomach acid to release B12 from food. Metformin drugs (Type II diabetes) also degrade absorption of vitamin B12 distributed in the pill form.

What is Vitamin B12 spray?

Super Health Vitamin B12 spray contains the natural and the most bioavailable form of B12 – Methylcobalamin  therefore there is no need for any futher conversion of this form by the liver (as in case of the synthesised form – Cyanocobalamin), you receive our supplement in the form most readily used by the body. Each spray provides a monthly supply based on a recommended daily serving (8 sprays) of 500 mcg.

Super Health Vitamin B12 spray offers the most effective and convenient way to take this vitamin daily. Tests in Oxford University showed that taking measured doses of vitamin B12 and other B group vitamins cut brain shrinkage by 30% in 266 people aged 70 and over.
Fore some people Super Health Vitamin B12 spray is invaluable. Vitamin B12 deficiency is common among vegetarians and vegans, because the main dietary source of B12 is meat. However, deficiency is also evident in meat eaters because many of them are unable to absorb B12 in their gut  due to common intestinal ailments. People who take acid-blocking medications including Metformin, prescribed for type 2 diabetes patients have also trouble with absorption of B12 too. 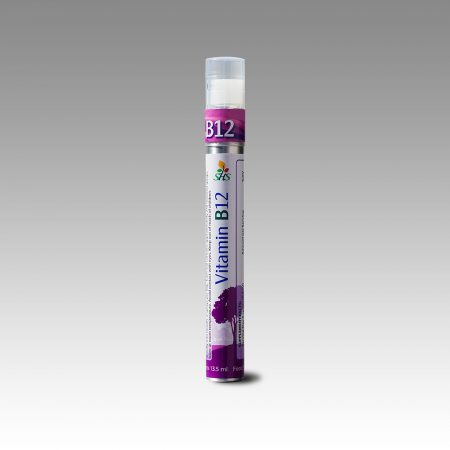 Supports Nervous System
Improves Vision
Controls of Homocysteine
Helps Better Sleep
Regulates Release of Stress Hormones
Supports Nervous System
Vitamin B12 is essential for a healthy metabolism of nerve tissue and deficiencies can cause brain damage and neurological disorders. As a result, methylcobalamin has been found effective in treating autism in children, as well as preventing cognitive decline in demented patients. High doses of methylcobalamin have also been used to treat Bell’s Palsy and multiple sclerosis. In constrast, cyanocobalamin does not express a methyl-donating property.
Improves Vision
Because of Methylcobalamin’s importance in nervous system health, it is also an important nutrient for vision. In fact, continued visual work (like work on a computer) often leads to a reduction in something called “visual accommodation”. Methylcobalamin can significantly improve visual accommodation, while cyanocobalamin appears to be ineffective.
Controls of Homocysteine
An elevated level of homocysteine is a metabolic indication of decreased levels of the coenzyme forms of vitamin B12, especially methylcobalamin. Homocysteine has received a tremendous amount of emphasis in the scientific literature because of its associations with heart disease and a variety of other specific health conditions. Vitamin B12, B6 and folic acid the main three B-group vitamins which lower a level of homocysteine in blood. The supplementation of methylcobalamin and folic acid appears to work much better for reducing the risk of cardiovascular diseases when both vitamins are combined together.
Helps Better Sleep
The most well studied use of methylcobalamin has to do with sleep. Although the exact mechanism of action is not yet clear, it is possible that methylcobalamin is needed for the synthesis of melatonin. Available information indicates that methylcobalamin can modulate melatonin secretion, enhance light-sensitivity, and normalize circadian rhythm (your 24-hour clock). Because of this, individuals supplementing this form of B12 often have improved quality of sleep, often will require slightly less sleep, and will not uncommonly report that they feel a bit more refreshed when waking in the morning.
Regulates Release of Stress Hormones
Because of methylcobalamin’s impact on 24-hour clock and the cycles, it also plays a key role in regulating your 24-hour release of the stress hormone cortisol (produced by by the adrenal gland). This seems to be particularly important for blood types A and AB. Methylcobalamin also seems to result in a better 24-hour maintenance of body temperature. Typically individuals supplementing this coenzyme form of B12 have higher temperatures in the later hours of the daytime. This usually corresponds with improved alertness and reduce tiredness during the day.