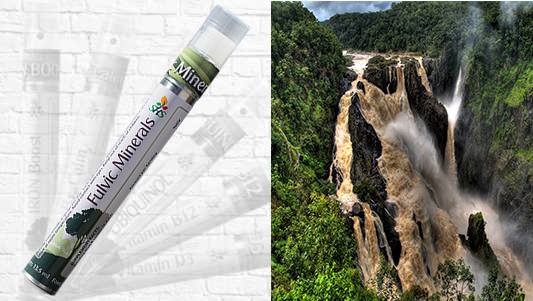 Minerals Spray is a unique supplement which has a special place in a range of all Super Health sprays. Fulvic Minerals are extremely powerful organic electrolytes, which balances cell life and can literally bring life back to dying or disintegrating cells. These  minerals have a natural way of chelating heavy metals, turning them into forms that allow their removal. They are also the most effective antioxidant rendering free radicals harmless. They are  the hidden treasure of the past of our planet which is now available for you in the most convenient and effective form of oral sprays.
BUY THIS SPRAY

While vegetables in our diet provide a variety of vitamins and minerals we need, there are others minerals from the soil that we cannot get by eating food alone. This category includes trace minerals, electrolytes is known as Fulvic minerals. They help activate and energize nearly every biological process in the body, supporting cells in the face of damage caused by oxidative damages, poor diet and lack of sleep. Taking Fulvic Minerals Super Health spray daily will provide you with the sufficient amount of trace minerals and electrolytes needed for carrying vitamins and other nutrients to the proper places in our bodies.

Detox and energise your body

electrolytes and trace minerals (over 70 types) derived from prehistoric plants’ fossils. The electrolytes are the body’s natural firewall against tumour formations, viruses and fungal infections (e.g.candida). It also helps healing burns with minimum pain or scarring. Trace minerals are needed for absorption of any single vitamin in your body and are vital transport facilities for intracellular micro elements exchange – their small moleculars can attach and carry clusters of other compounds as big as 60 times of their own size. In addition, Fulvic Minerals spray works a extremely powerful blend of antioxidants providing energy to cells and defence against any oxidative stress in your body.

Over  million years ago enormous rain-forests covered much of the earth’s land with gigantic plants. Their root systems could reach deep into the earth, get a lot of inorganic minerals and convert them into biologically-friendly minerals via photosynthesis. Once these giants died, the organic minerals within their structures were re-deposited and  diverse fulvic acid mineral colloids were evolved.

Fulvic minerals are obtained from fossils of prehistoric plants existed 75 million years ago (when the earth was pollution-free and the soils were mineral-rich), which were not converted to petroleum. It is important to stress that in Fulvic minerals blend  the combination of minerals and molecules of the organic matter depends upon the mineral composition of the soil where the plant grew. So, multiple minerals bound to a specific amino acid which is friendly to living cells. As a result, the body can easily recognise and absorb such molecules with all minerals attached to them.Fulvic acid usually carries 70 or more minerals and trace elements as part of its molecular complexes. Furthermore, Fulvic acid complexes have the ability to bio-react one with another, and also inter-react with cells to synthesize or transmutate new mineral compounds. Fulvic acid – a liquid form of Fulvic minerals – has proven to be a powerful organic electrolyte which balance cell life. In repeated tests on animal cells, when the electrolyte potential was taken away, the cell ruptured and disintegrated into the surrounding fluid causing death. By contract, reintroducing electrical potential helped the cell get reconstructed and became active and healthy.The same studies determined that the progressive weakness among humans caused by emotional stress, uncontrolled infections, unbalanced diet, prolonged loss of sleep and surgical shock is accompanied by a steady decrease in electrical potential. So, it was concluded that the physical well being of plants, animals and humans is determined by proper electrical potential in cells. 1. Power of an electorlyte – Crile, G. (1926). A bipolar theory of living processes. New York: McMillan. 2. Decrease in electrical potential – Crile, G. (1926). A bipolar theory of living processes. New York: McMillan 3. Powerful electrolyte – Jackson, William R. (1993). Humic, Fulvic and Microbial Balance: Organic Soil Conditioning, 329. Evergreen, Colorado: Jackson Research Center.

People often ask why we need to take this type of supplement? The answer is that up to 95% of our body’s functions depend upon minerals in one way or another. Most people do not know that in our body minerals are needed to activate enzymes (which control all bodily processes). Minerals also help transmitting nerve impulses, assisting muscle contraction and regulating physiological processes such as blood volume. Generally speaking, vitamins cannot function without minerals in the body. At the same time, minerals are substances that the body cannot produce and historically have been obtained from the diet. There are minerals with simple molecular structure and others – with more sophisticated clusters of mineral compounds. These complex clusters, known as  Fulvic minerals, exist in form of acid that can be easily admitted into living cells. Due to their low molecular weight and high electrical potential Fulvic minerals get inside the living cell where they participate in selective  supply of minerals and other nutrients inside the cell. In addition, Fulvic acid  neutralises a wide range of toxic materials –  heavy metals, radioactive waste, petro-chemicals and industrial waste – by reducing them to a harmless state. Fulvic Minerals are extremely powerful antioxidants, so powerful that their single molecules can transport more than 60 times their own weight in minerals and other nutrients into the cells. Acting as electrolytes these complex molecules can be found in tissues and body fluids. They also scavenges heavy metals and detoxifies pollutants. Today, a large portion of the trace mineral content has been lost from our food supply.  This is due to soil depletion and the loss of topsoil because of over-irrigation, deforestation, over-farming and poor crop rotation.  The result is that much of the food we eat today contains an insufficient range of minerals. Fulvic Minerals oral spray, with a range of more than 70 trace minerals, is  designed to help compensate such imbalance. Use spray daily  to  avoid minerals deficiency and maintain a healthy level of electrolytes in the body that would deliver a vital charge of electricity to every your cell and take away toxins.

“In the absence of minerals, vitamins have no function” – Dr. Mathias Rath, MD

“Every sickness can be traced to a mineral deficiency” – Dr. Linus Pauling, PhD

Benefits of a Fulvic Mineral Supplement

Fulvic acid complexes have the ability to react one with another or with cells to synthesize new mineral compounds. So it enhances mineral absorption even while providing more than what you’re taking in. It has detoxifying capabilities of some of the very pesticides used in conventional farming, just in case you have to go there now and then. Fulvic acid increases the activity of enzymes, especially those associated with the respiratory system. It also metabolizes protein. These are determinations of researchers in the west. One of the most important benefits of Fulvic minerals is that they can stimulate the immune system resulting in increase of the body’s ability to resist all kinds of infections. They do both – boosting and regulating immunity. Fulvic acid minerals can also help encourage the body to heal and maintain detoxification since they help with the absorption of other essential nutrients into the body. Fulvic acid makes nutrients more absorbable. For example. having Fulvic acid with your mineral supplement will promote better absorption of the minerals in the supplement. It maintains cellular integrity and aids in the cellular detoxification process. This results in Fulvic minerals having a potentially large impact on body health.